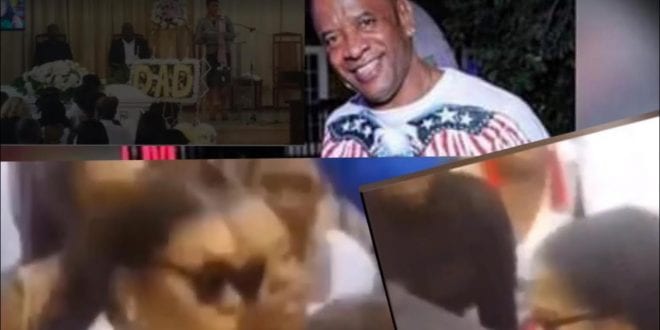 “nuh put him dung suh open it mek wi see him… wi wah see him, mi cah see him..” Then it was a back and forth argument between Oney’s daughter and his young wife. “nuh video him” another person shouted! the cussing continued from both sides of the casket where it seems there were opposing family members “dem a seh dem nuh wah nuh video… respect dem thing” a man stated in the midst of all the cussing back and forth.

Oney British got the name as he was known to walk/hop around on one Leg while the other leg was damaged. Oney was said to be a part of the Famous Dancehall British Linkup team. ‘Oney British’ was shot and killed minutes after leaving Champs which took place at the National Stadium, Mountain View area in Kingston.

Oney was 56-year-old and his real name is Alphanso Harriot.

Watch as his wife and daughter exchange words at his burial below!

WATCH: L.A. Lewis Talks about Getting Death Threat after Saying This About Oney British [Video]

READ: King of British Link Up “Father Fowl” shot dead in Jamaica… Said to Be one of the Biggest UK Cocaine importer