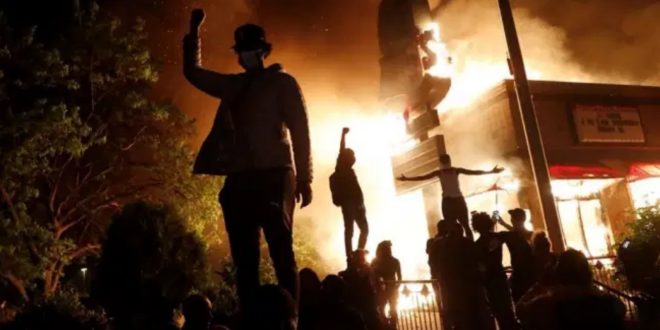 The protest in California continues as an officer was shot dead and another was injured.

The incident took place at the northern California city of Oakland after thousands of protestor took to the streets for the death of Mr. Floyd.

There are no suspect as of yet but an investigation has been launched.

The shooting took place as the protest continues for the fifth day whereas several more protests have broken out in New York, Atlanta, Detroit, Washington D.C and many other cities.

A teenager was killed in Detroit after one of the confrontations went violent and shots were fired on the crowd on Friday, it’s still not determind who fired the shot that killed the 19 year old.

A huge crowd was outside the White House, Washington D.C. all night long. Meanwhile the president’s bodyguards – stood guard.

A tweet from Donald Trump said that “vicious dogs” and “ominous weapons” would have been use against protestors trying to pass the guards.

He tweeted: “They were not only totally professional, but very cool. I was inside, watched every move, and couldn’t have felt more safe”

“They let the ‘protesters’ scream & rant as much as they wanted, but whenever someone got too frisky or out of line, they would quickly come down on them, hard – didn’t know what hit them.”

Donald J. Trump added: “The front line was replaced with fresh agents, like magic. Big crowd, professionally organized, but nobody came close to breaching the fence. If they had they would have been greeted with the most vicious dogs, and most ominous weapons, I have ever seen.”

Derek is said to be on suicidal watch according to latest reports.