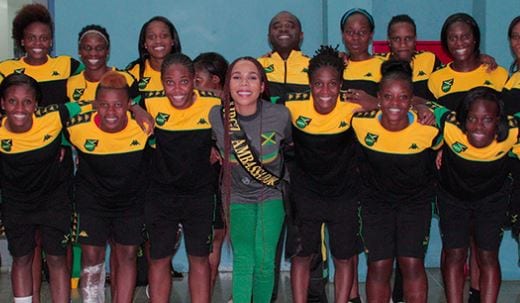 Reggae girlz Ambassador, Cedella Marley launches a stinging attack on the (JFF) Jamaica Football Federation, as the National Women’s Football team gets ready to go on another international assignment. She found the US$42,000.00 in a quick move, she said her organisation would book transportation, hotel accommodation and airline tickets. When the JFF found it difficult to find the necessary funding for a camp for the girls.

The JFF does not want sponsors to continue the practice of spending money on teams without first giving funds directly to the Federation. The President Michael Ricketts is now willing to extend the olive branch to Cedella so that the camp that she tried to fund, will go on. As preparation is needed before the game with Panama and other teams.

“The federation is being defamed; this will ruin the future of the federation as they won’t have money to fund all their programs for 14 teams they are trying to help at this time. ” Sophia Harris (the director of marketing at the JFF) said, as she refuted the claims. She says budgets were given to the sponsors and she doesn’t see why there seems to be a problem.

Contributors are not getting audited reports from the JFF and this causes mistrust and persons are now unwilling to give money directly to the JFF. They prefer spending it to do things that will benefit teams directly.

Jmaiaca Reggae Girlz were present at the females worldcup in france recently however they unfornately lost all three matches they played in the group stages hence not making out the group. This was the girlz’s first time to the worldcup.