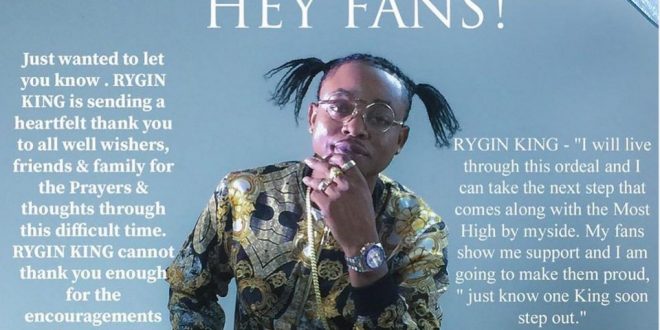 Mobay deejay Rygin King whose given name is Mathew Smith officially breaks his silence after he was shot multiple times and hospitalized.

Rygin King was shot and badly injured in Westmoreland several weeks ago.

Rygin King’s previous post online was from June 4th before he got shot, now on July 28th Rygin King returns online to update his fans with some positive words.

Rygin Stated “Hey Fans!.. Just wanted to let you know Rygin king is sending a heartfelt Thank you to all well wishers friends and family for the prayers and thoughts through this difficult time”

He went on to state that “Rygin King cannot thank you enough for the encouragements and motivation meanwhile gaining strength and courage to make a full recovery”.

Rygin King also gave many thanks to the hospital staff that took good care of him, he did not stop there, read more of what he had to say in the post below.

Two other people were shot in the incident. The DJ was rushed into emergency surgery at the Savanna-la-Mar hospital after the incident occurred. Sashalee Blackwood from Irwin Meadows in St James, lost her life because of her injuries.

Rygin King was moved to at least two different Hospitals because of security concerns.

Rygin King became a star in 2018 when he was the closing act at Reggae Sumfest. His most popular songs include “Things Go Change” “Tuff” “How Me Grow” and “Ruption”.