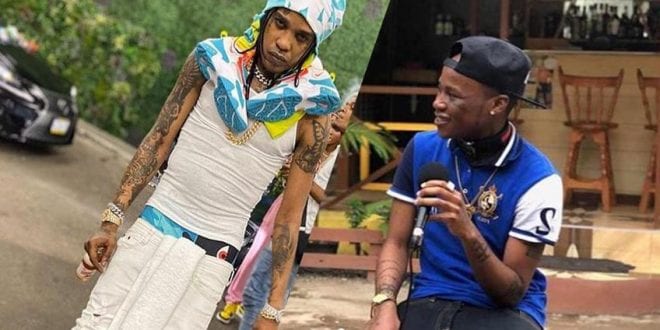 sharetweetWhatsapp
PinterestDiggLinkedinRedditStumbleuponTumblr
Share
In a recent interview, Ace Gawd tried to clear up the controversy that has been going on because he sounds like Tommy Lee. Jamaicans are saying he is trying to take over Tommy Lee’s style and he says he has not changed his voice in any way and there is nothing he can do if his voice causes him to sound like Tommy Lee, who is another Jamaican artiste that puts out music that is similar to his.

There is not much difference between both of them as they both have connections with the dark side. The EMO artiste had an evil-looking creature on his hoodie, he wears a Guard ring and deejays dark lyrics sometimes, and Tommy Lee is known in the Dancehall as the Demon.

However, Ace Gawd says he and Tommy Lee have a cordial relationship, they respect each other, and he sees no sense in creating animosity just to get noticed. Even though in the streets, fans call him, the Demons son and other similar names.

He believes he is depressed, and he wants to use his social media presence to reach out to people who are also depressed because he knows what they are going through.

When he was asked about the level of respect he has for the older artistes, such as Beenie Man and Bounty Killer, he said, “he knew they worked hard to open doors for him, so he could be doing what he does now, but he does not listen to their music”.

Previous What Can Run But Not Walk?… Trick Questions In Down Town, Kingston [Video]
Next Man Lost his Leg after Crocodile Attack in ST. Thomas