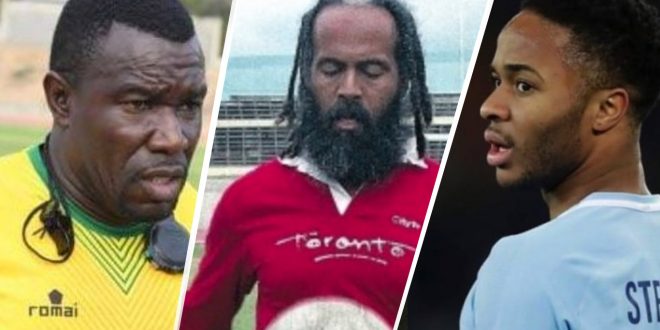 These are Top 10 Jamaican Born Football Players of all time

This list is based on Jamaican footballers who played for both a club and country at the highest level and are known and loved by an entire generation.

On this list, you will find players who did not represent Jamaica’s national team however all these players were born on the island and went on to make a name for themselves.

At number 10 is Jamaica’s top striker Luton Shelton who was born on the 11th of November 1985 in Kingston.

Shelton first played as a Reggae boy in 2004, he went on to earn 75 caps and is Jamaica’s current record goalscorer with a total of 35 goals, he played in three CONCACAF Gold Cups.

In the number 9 spot is Leon Patrick Bailey who is the youngest one on the list and even though he is yet to achieve accolades like several others on the list, Leon Bailey is currently regarded as one of the best young footballers in the world.

Leon bailey in many respect is the Jamaican player of his generation.

Bailey was born on the 9 of August in 1997, he now plays for Bundesliga club Bayer Leverkusen and the Jamaica national team. Bailey after a very long wait finally represented Jamaica recently in couple of competitions most notably the Gold Cup.

Number 8 is Ian “Pepe” Goodison, born in the year 1972. He was drafted into the national squad by then-coach Renee Simoes who saw his potential from minor Jamaican club matches.

He later went on to become a part of the world cup 1998 squad where he played defence.

Ian Goodison is also widely known for his accomplishments at Tranmere Rovers in England where he played until he was over 40.

In number 7 is Walter Boyd, Walter Boyd was considered to be very controversial but a great player nonetheless. He accomplished an amount of 60 caps for the Jamaican National football team.

He also played for Swansea City as well as the Colorado Foxes at an international club level.

The now-retired player also referred to as “Black Pearl” made 3 appearances in the 1998 world cup as a substitute.

In number 6 spot is Ricardo Fuller who was born in the year 1979.

Fuller started his career locally with The Tivoli Gardens football club then going on internationally to play for teams like Crystal Palace, Portsmouth, Southampton and Stoke City.

Fuller has been involved with the Jamaican National team as a forward since the year 1998 where he has grown from an under 20 player to a senior who took part in world cup qualification matches as well as the CONCACAF GOLD CUP.

In number 5 we have Ricardo Gardner affectionately known as “Bibi Gardner”. He was born in the year 1978.

Gardner has achieved an amount of 111 caps playing for Jamaica at the world cup level as well as the CONCACAF GOLD CUP.

“Bibi Gardner” started his career from an early age of 14 for the Harbour View team in Kingston.

He was made captain of the National team from 2005 to 2009 for which more same years too he played at the club level for Bolton Wanderers team in the English Premier League.

He is now retired from football, now actively coaching the game.

In number 4 is Allan “Skill” Cole born in the year 1950. He was noted as one of the best players in the world cup qualifying games of his time.

He is also celebrated as a co-writer to Bob Marley on the 1976 released song “war”. He was also the tour manager for the reggae icon. Allan also taught Bob Marley football, he is highly regarded by persons from his era. Allan is still the youngest player to represent the Reggae Boyz at age 15.

In the number 3 position is Theodore Whitmore the retired midfield player known as “Tappa”.

Making his debut in 1993 for the National team Theodore Whitmore has gone on to get 105 international caps with 24 goals. He went on to represent Jamaica throughout the years becoming one of the key players for the National squad.

He is known for scoring the two goals that gave Jamaica their only win at the 1998 world cup.

He also played for several English teams and is now the manager of the Jamaican National Football team.

In number 2 position is Jamaican born John Barnes who is currently an Espn commentator.

He played for Liverpool for several years earning league titles with them as a left-winger. He also represented the English team internationally in the Fifa World cup even though he was Jamaican Birth.

In the number 1 position according to the player tracker is Jamaican born Raheem Sterling who migrated to the Uk at an early age. He was born in the year 1994.

The footballer plays as a left-winger who started his career with Queens Park Rangers before he moved on to playing for Liverpool. While at Liverpool he was awarded the Golden boy title.

He then moved on to play for Manchester City where he helped them to two premier league titles.

RELATED: These are the 10 Richest Jamaican Athletes 2020

He is well known for his high-value transfer fee of $49 million dollars that Manchester City had agreed on.

RELATED: These are the 10 Richest Jamaican Athletes 2020