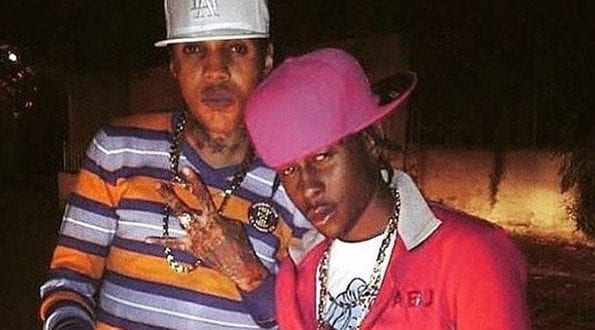 Dancehall News, To dancehall fans surprise Vybz Kartel and Pocaan have officially teamed up for a collaboration after not doing so in over 10 years. The song named “Cute Rider” which is originally featured on Kartel’s album “of Dons and Divas” was remixed to feature the Unruly Boss and Spice the queen of the dancehall.

Earlier Popcaan released a song produced by Vybz Kartel, this was the first time we saw the two working together since Popcaan’s contract ended with Vybz several years ago.

Even though Popcaan makes sure to big up Vybz Kartel over the years, Kartel has done the opposite until recent times, Kartel went as far as having his sons deejay about not Trusting Popcaan in one of their earlier music releases.

Now there seems to be a change of heart, at least from Vybz kartel’s side.

The song was released over a year ago titled “Goals” and it’s on the Freedom Street Riddim Produced By: Vybz Kartel Muzik. The riddim originally had Vybz Kartel, Lisa hyper, Squash, Sikka Rymes.

Now their new yet to be released song titled “Cute Rider Remix” is considered to be a long time coming and is a positive move for the two. The song is produced by Vybz Kartel himself and his wife Shorty as they did on their last collab titled “Goals” which leaves one to believe that Shorty is the catalyst for the collabs musically between the two.

It’s unclear when the song will be released as a release date was not revealed.

See the official artwork below

Dre Island released his album titled “Now I Rise” and his musical friend Popcaan was out and about promoting it and giving the Rasta Reggae artiste a strength on the release.

After a Gaza fan saw Popcaan’s action, he questioned Popcaan as to why he did not promote Vybz Kartel’s album as well. Popcaan’s reaction was very disrespectful and possibly highlighted the fact that himself and Vybz Kartel are still upset with each other, even over petty stuff like sharing an album.

Popcaan was asked “How comes i dont see you posting up kartel upcoming album? the man that gave you the shine and recognition”, The Unruly Boss replied stating “bwoy go suck yo mada a she alone give me shine and a that me love!! you see kartel a share my album???”.

It must be noted that after bashing Popcaan for years Vybz Kartel seemingly reunited with Popcaan after tagging him in several instagram posts, especially the ones about his album “of Dons and Divas”.

According to Politricks Watch Vybz Kartel Placed a hit out on Popcaan shortly after he got his Black Range Rover. The video which was released on youtube has racked up over several hundred thousands of views as Politricks Watch gave extensive details on what transpired and what could have transpired.

In 2016 “do you remember when you tell black man that because Popcaan is an informer he needs to be taken care of?” Politricks Watch asked Kartel.

RELATED: Vybz Kartel Replies to Allegations That He Tried To Kill Popcaan

This is what Vybz Kartel wrote in response to the rumours “i wanna kill someone but shit.. road block.!! mi na badda” with laughing emoji and tagged Popcaan.

Popcaan is yet to comment directly on the matter.

Vybz Kartel and Popcaans earlier collabs which are several years ago includes, Vybz Kartel Ft Popcaan – We Never Fear Dem and Vybz Kartel ft Popcaan & Gaza Slim – Clarkes by all accounts this new release is expected to be a hit.