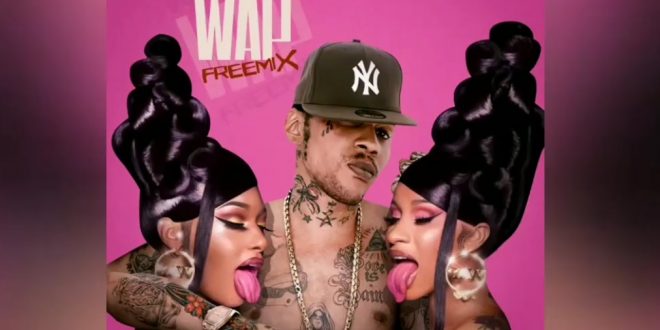 Vybz Kartel has just teased his fans with a short video clip previewing a song that has his fans wondering if he will drop it or not.

The song that is very sexual in its nature is a remix of female American rapper Cardi B’s new song entitled “Wap” featuring Megan Stallion which is currently trending number one in Jamaica.

In the song the female entertainer speaks to her sexual life and things she wants her male partner to do to her.

Cardi B in her song stated that she is a certified freak all seven days of the week, in Vybz Kartel’s remix he repeatedly stated “but i still love you”, In a very different style to what he usually delivers. Kartel who made it ok to sing about loving “freaky” girls in dancehall is now following up on his previous statements.

Kartel sings about ejaculating is his female’s mouth and a whole bunch of other nasty stuff however he was quick to point out that he dont want any “batty wash” clearly still poking jabs at Alkaline.

Cardi B seems to really like the remix as well because she did not hesitate to comment on Vybz Kartel’s post letting him know that she wants to hear the song.

Fans are eagerly awaiting to see if the “Teacher” will indeed drop the new song he just previewed.

Check out the song posted by Vybz Kartel below