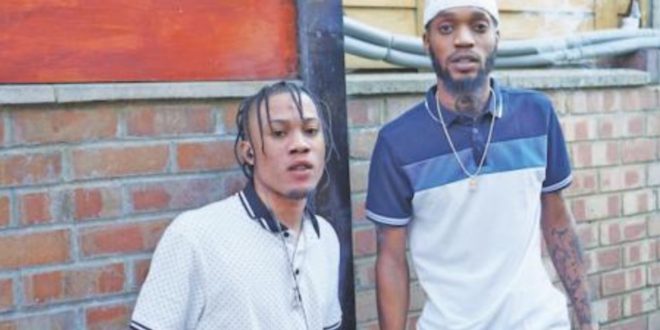 Trending dancehall artistes Intence and Iwaata recently released their much-anticipated collab titled “HAVOC” and while the word Havoc is not repeated in the song what the two said in the lyrics is sure about to create a havoc between themself and the Gaza camp.

Intence and Vybz Kartel traded Subliminals months ago online after Vybz Kartel claimed the young dancehall star was buying trending on youtube. While Intence did not attack Kartel there and then, now he is reigniting the feud with hardcore insults aimed at the Worl’Boss.

Kartel earlier asked if something was wrong with vevo “or a some guys a buy trending? ” At the time of his comment, Intence’s song was trending at number one at the same time Kartel released his feature with Teejay.

Vybz Kartel regained his number one spot on trending seemingly after Teejay removed the video that was also uploaded to his youtube channel.

Months after that spat between the two, Intence and his dancehall friend Iwaata are standing their ground, picking their side and launching an attack on the other side, seemingly the Gaza side.

“All da one deh ova deh suh know him been a back it” states Intence While Iwaata followed up declaring that “the short gal him have up regular mi run a battery”. The fans are commenting that the young St. Andrew artistes are talking Vybz Kartel and his common-law wife Shorty.

“Yo kill yo fren suh yuh nuh real” It’s a popular claim that Vybz Kartel is a friend killer after he was found guilty for the killing of his former associate Clive Lizard Williams.

Fans are also in the comments highlighting that the dancehall duo disses Chronic Law and Squash in the controversial song via their lyrics slandering “Fat Boy” with a big belly who loves to smoke chalice.

The song is currently the 45th Trending song in Jamaica.

Vybz Kartel based on historical happenings is not about to make this fly and dancehall fans are expecting a reply from the Portmore deejay anytime soon.