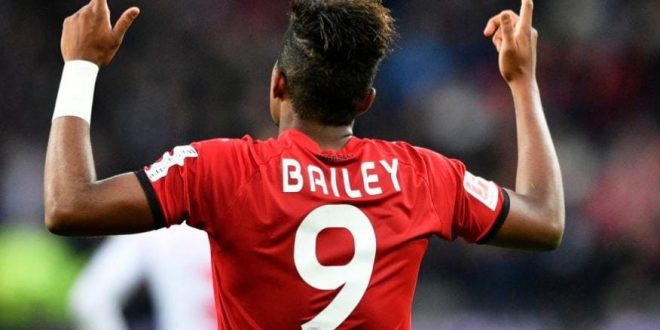 JFF still trying to get Leon Bailey to play for Jamaica

sharetweetWhatsapp
PinterestDiggLinkedinRedditStumbleuponTumblr
Share
While Craig Butler, Bailey’s stepfather and agent as stated in the past that Leon will not play for Jamaica, it appears the flashy inform 20 year old attacker who now plays for Leverkusen in the Bundesligais is still very much desired by the Jamaica Football Federation and they are making it clear to the public.

Butler broke the news in an interview saying “I will be speaking to Dan Ashworth at the FA(ENGLAND), but now it is a definite no as far as playing for Jamaica is concerned,” Bailey said.

In a recent release the JFF president Michael Ricketts stated that “We are going to continue to invite him, and each time we have a game that will be played in the FIFA window, we will extend an invitation to him.”

Reicketts went on to state that “Eventually he will want to know that he is playing national football, not just club football. And if he is not qualified to play for another country through naturalisation or through marriage, the only country that he can legally represent is Jamaica.”

One of the issue at hand as stated by the JFF is that Leons agent, Butler would like to be apart of the JFF. While on the other hand Bailey recently slammed the JFF and stating that he wouldn’t consider playing for Jamaica football team until he sees changes made at the top to bottom.

Ricketts however outline: “We aren’t going to do anything special to facilitate any particular player. Whatever we do is exclusively, in the interest of the football, nationally, and we can’t make an adjustment for a player.