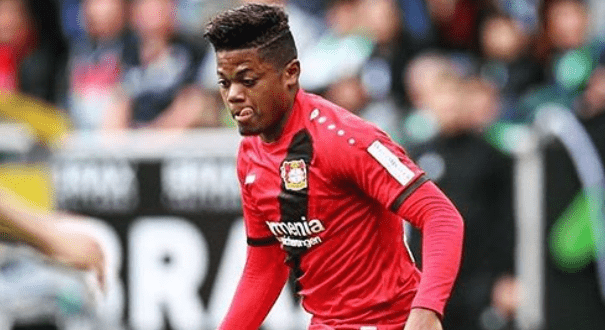 Leon Bailey makes Team of the Season in Bundesliga

sharetweetWhatsapp
PinterestRedditStumbleuponTumblr
[Sharingbuttons]Bailey the Jamaican star winger missed out on securing a place in the next season’s Champions League but he has made Goal.com ‘s Bundesliga Team of the season.

He contributed nine goals and seven assists and put Leverkusen in Champions League Leon contention, but they still missed out as they finished 5th on goal differences, Hoffenheim and Borussia Dortmund were ahead after all three teams finished, they tied on 55 points.
Bailey who is 20 years old is in his debut season.

Bailey who grew up in Cassava Piece, Kingston Jamaica was adopted by Craig Butler in 2011 and has become a professional footballer who has made Jamaicans proud. Craig Butler and his belief in the talents and skills of Jamaican youngster is truly admirable.

JFF still trying to get Leon Bailey to play for Jamaica