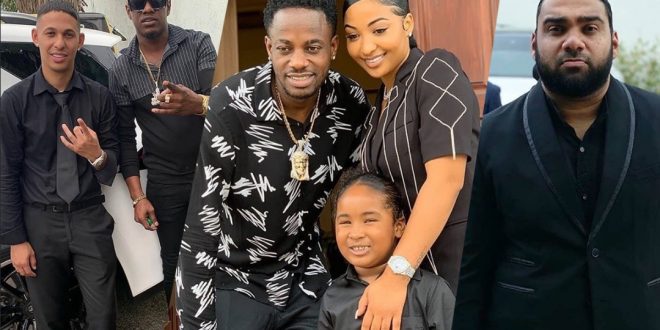 Today was Shenseea’s mother’s funeral and it saw many friends and loved ones pouring out in their numbers in support of the Dancehall artiste. The talented female dancehall artist lost her mom as a result of a sudden illness and since then Shenseea has made it clear that things are not the same and she needs support in the form of strength and not condolences.

In several Instagram posts made online by various accounts, it showed where some of her fellow celebrity friends attended and gave musical respect to Shenseea’s late mother. Romain Virgo gave a wonderful rendition of the well known song “You are the Potter and I am the Clay” and Taurus Delivered a song entitled “Remember me” while playing guitar.

The supporters of Shenseaa who also turned out to the funeral got to witness a speech done by Shenseaa expressing how she feels and letting them know how much of a humanitarian her mother was.

Fans of the artist have also been pouring out their love sending their best wishes in the Instagram comment section for the videos.

See Pictures from the funeral below

Shenseea is yet to post or make mention of the funeral online while her friend Rvssian posted a IG story with himself and her at the funeral, Shenseea’s mother passed away in late June.

Shenseea below giving speech at her mother’s funeral church ceremony.

Romeich, Ding Dong and others at Mama Shen’s funeral