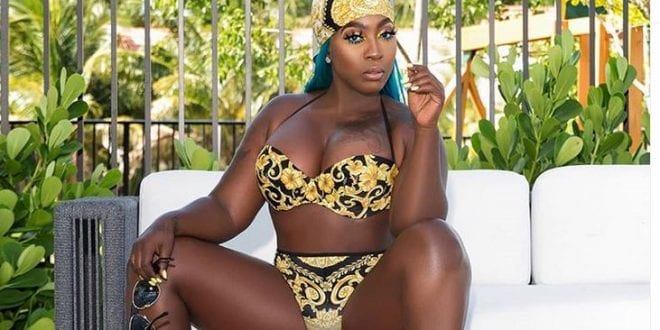 On Monday night Spice celebrated her birthday in Mass Camp with thousands of fans. Every half hour a brand-new Windy AC unit was given to one lucky fan, after they could prove that they were a fan.

Operation cool it down was in full effect when Spice arrived, and she was in a giving mood. Fans were sprayed with water, there were singing and dancing competitions, Spice also gave away refrigerators, fans and said. ”How could I not go big for my fans when they go big for me”?

Spice has been putting on these events for many years and she realised that the number of persons who attend the event kept on growing each year. She is planning to have a bigger and better event next year and has started thinking of using a bigger venue.

Candy helped with the give-aways and there were surprise performances by Laa Lee, Cham, I-Octane and Vershon as they celebrated with Spice.

Lisa Hanna, the politician was also there, and she spoke about her special friendship with Spice and said it might puzzle persons.

Thanks to everyone who came to my birthday party 🥳 words can’t express how much I love all of you I really appreciate the love and support from my country and will continue to wave our flag world 🌎 wide.

I didn’t advertise this but I gave away a A/C units every half hour at my birthday party. All my fans had to do was sing any one of my songs to win one so congratulations to all the winners even the dancers who did a dance off . My party was mad lit 🔥