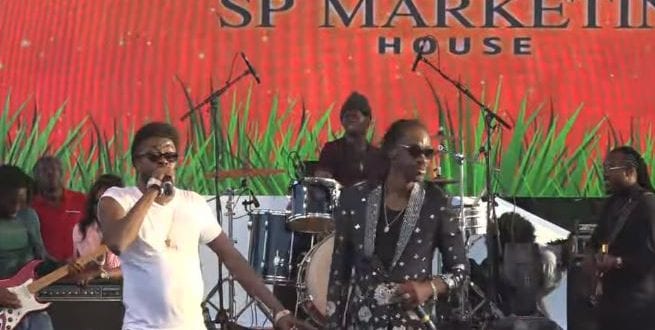 Summer Sizzle is back this year with Big name artistes who are all about putting music that is about respect, unity and all other things that the people need to hear at this time. The latest staging of the show was kept yesterday August 10th in May Pen, Clarendon.
[Sharingbuttons]

Beenie Man in an interview was asked about Squash, Chronic Law and Daddy1 not turning up to perform at his show, What happened to the 6ix? he was asked, Beenie Man replied “May god go with dem cah i cant” Beenie Man went on to state that he has nothing to say to the 6ix team and if they turned up they would have been allowed to perform.

More on the Event.
Krystal Tomlinson and Beenie Man spoke about the event and the help they are giving to the Sickle Cell Foundation at the University of the West Indies recently in an Onstage interview.

The promotion for the event was handled by a marketing house, but Beenie Man did all the bookings for the show. There were a lot of big-name artistes who are doing music that is uplifting and clean.

Krystal said she is focused on what she can do for the Sickle Cell Foundation this year, as the management team of Summer Sizzle donated $300,000.00 to the Foundation last year.

This went a far way in helping poor children who needed treatment and could not afford it. Beenie Man is closely connected to the disease, because of his son Moses. He has been getting treatment for the sickle cell disease for many years at the University of the West Indies Hospital.

This year’s event was for the whole family, the children had clown shows, rides, slides and other fun activities to enjoy in the day while parents enjoyed the stage show in the night.