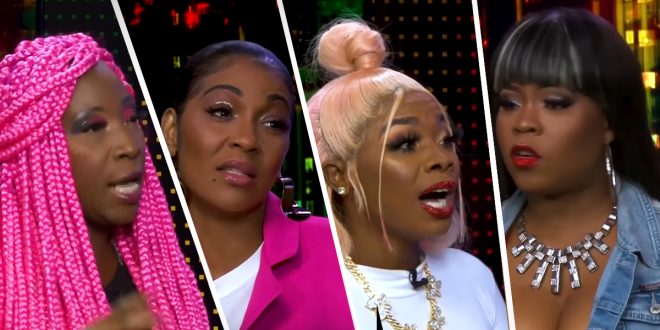 The women in dancehall music have decided to move in a direction of unity and empowerment following the organization of an all-female project released by Delomar of the Dancehall group “RDX”.

Female veterans in the business such as D’angel, Macka Diamond, Raine Seville, and Pamputae are all featured on the body of work entitled “Pink riddim”.

All this was revealed on the Onstage show that had all the females on the project passing through and giving great performances for their songs.

In a talk with Winford Williams, Macka Diamond and Raine Seville touched on some topics that certainly deserve some attention.

The female artistes explained to the host that women are not being paid as much as the men in the music.

They spoke to the fact that being women in the business, they put in a lot of work, sometimes more than men, and need to be recognized for their efforts.

Macka and Raine also stated that it is more expensive for women to put themselves together in the music as it relates to fashion hence they should also be considered as a factor for better payment.

Macka Diamond told Winford that it does not matter what differences she has with any other female artiste she is still willing to put in the work. She also spoke a lot about money, making it evident that getting paid was her focus.

The points made by Macka, certainly had D’angel and Pamputae agreeing and even adding to it by stating that when there is a mixture of male and female on the juggling riddims, the females often outperform the men.

Confidence and the willingness to work together are all things the Queens of Dancehall agreed on and it certainly shows on the ” Pink riddim”.