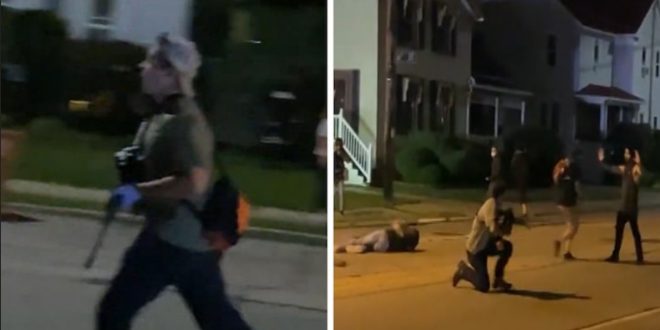 Kyle Rittenhouse a reported “vigilante” shooter from Kenosha, Wisconsin has been arrested and now facing murder charges. The man was said to be apart of an armed group that intended to illegally prohibit the protest of the police shooting of Jacob Blake days ago.

In the video we see Kyle Rittenhouse running through a crowd with a rifle in hand, several persons tried to attack him shouting “stop him” after which Kyle was pushed to the ground. While on the ground and still being attacked Kyle started shooting individuals around him which lead to multiple persons getting shot and two dead.

Further reports states that Kyle already shot someone a couple blocks away hence several persons were after him.

Watch the graphic video below.

RELATED: Protests Erupt after ‘Jacob Blake’ was shot 7 times in the Back by Police

RELATED: Megan Thee Stallion opens up about TORY LANEZ shooting her “You Shot Me”

RELATED: Residents protest the ‘Fatal Shooting’ Of a Man by police in Cockburn Pen

RELATED: Wendy’s in Atlanta Burn Down after another Fatal Police Shooting

RELATED: “Uncle Demon” aka Tommy Lee Summoned By The Police In Relation To A Shooting