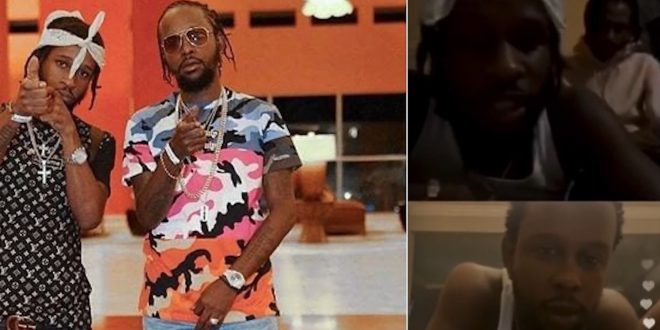 Popcaan and Quada Jokes about “Lizard” Missing for years – Video

Popcaan joined Quada on his Instagram live a day ago and the entire session was full of “trouble”. After talking about their comedic friends and Monkeys in Guyana, the topic was switched to Lizards in the Cayman Islands by Quada not expecting Popcaan to react the way he did.

Fans are connecting this missing lizard joke to Clive Lizard Williams who was reported killed, according to the police by Vybz kartel, the body is yet to be found.

After watching the chat, one person commented “No body found tho my man’s probably hiding it’s Jamaican way of trying to get rid of controversial artiste since bob marley government try a ting #freeaddi#worl’boss” WHile another said “Popi a one real trouble Meka …an mi think him chat to much”.

RELATED: “Cancer ago Kill Him in Deh” Says Lizard’s Mother after kartel’s Verdict

RELATED: Mr. Vegas has This to say about “LIZARD” and Vybz Kartel Case