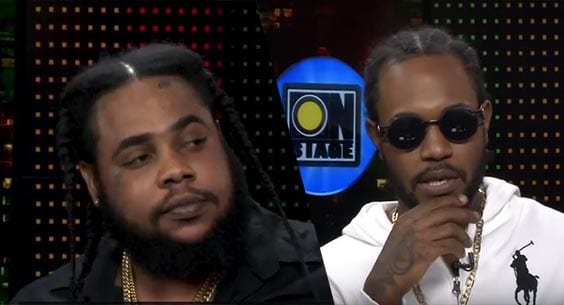 Last week was Reggae Sumfest and the 6ix camp did not perform hence Squash, Chronic Law, Daddy1 etc were present on OnstageTV to talk about their Disappointments with not being allowed to perform at the show.

Squash explains that he was about to touch the stage when he was told that the 6ix will not perform. The reason for them not performing on the night was due to the fact that the show passed it’s closed off time and artistes were on stage cursing expletives.

Squash told Winford Williams that the promote need to take some responsibility for the 6ix not being able to perform. Squash states that he will of to think first before accepting to perform at another reggae sumfest.

Squash noted that he felt targeted by the cops and reminds us that he was recently locked up in Jail for no good reason.

Squash was then asked about former 6ix team member Jahvillani to which he did not have much to say but “them a tix, dem a nuh 6ix”, Squash called out his current 6ix team members and states that he don’t know who Winford is talking when he asked about the fallout with Jahvillani.

Jahvillani was the final artiste to perform at Reggae Sumfest, the 6ix team was set to go on stage next but the show was cut short.

Throughout the interview Squash made sure to address Jahvillani as Tix and not 6ix.